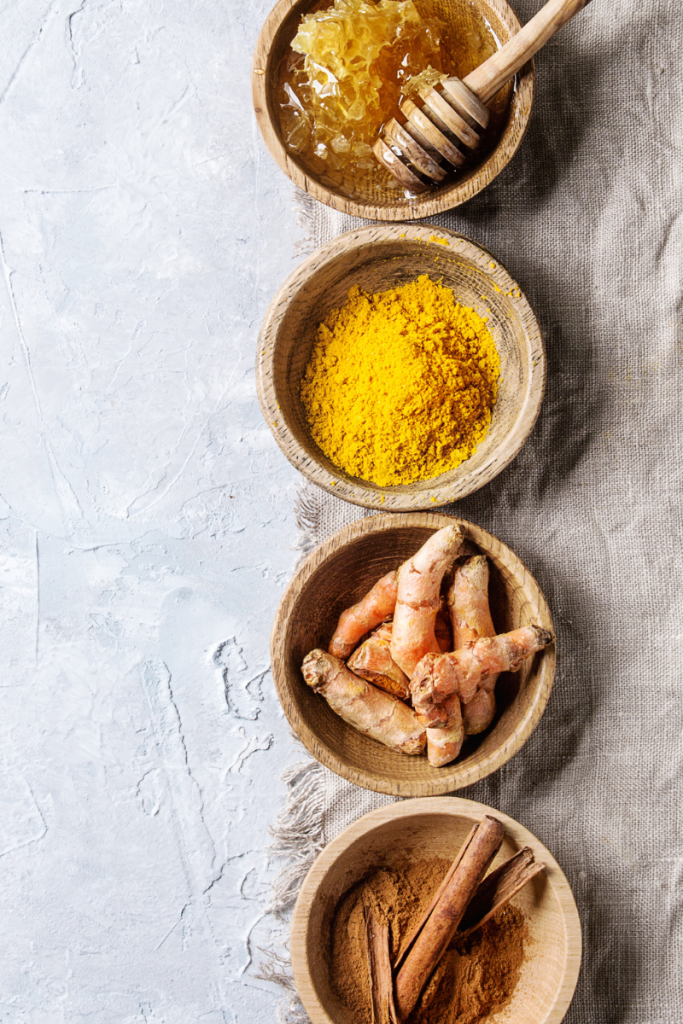 Turmeric has made its appearance as a superfood in the world of health and wellness but why should you use this spice? What are the reasons to eat turmeric?

From turmeric teas, smoothies, and lattes to health supplements, there’s no doubt that turmeric is a potent superfood.

What makes turmeric so powerful and what are the reasons to eat more turmeric?

Why is it healthy?

If you’re not into spices, why add turmeric to your diet?

Because this little herb possesses an impressive list of health-boosting properties.

What is Turmeric and where does it come from?

Turmeric is native to Asia and a part of the ginger family.

The bright orange spice we see on shelves was used for thousands of years medicinally and in cooking.

In India, for example, remnants of this spice were found in pots thousands of years old. In Ayurvedic medicine, turmeric is used to relieve skin issues and anything related to inflammation.

Turmeric has been thought of as a powerful herb throughout history and here are my top reasons to eat more of this amazing spice.

1. Turmeric may inhibit the growth of cancer cells

There is a growing body of research that shows the link between turmeric and anti-cancer activity. This study showed that the polyphenols found in turmeric have natural bioactive compounds.

These compounds may help in the treatment of several types of cancers.

Cancer is an inflammatory disease. Turmeric is a natural but powerful anti-inflamatory herb proven to fight cancer cells and cancer cell growth.

Amazingly, authors from a review published in the AAPS journal concluded that these polyphnols had the ability to kill tumour cells while leaving healthy cells untouched.

Curcumin is the most known and studied of all the polyphenols found in turmeric.

Polyphenols are plant compounds that have health benefits for humans and animals.

Curcumin is a powerful candidate for fighting diseases like cancer because of its ability to only target cancer cells.

Curcumin is also an antioxidant and antioxidants fight free radicals. Free radicals come when the body comes under oxidative stress.

These free radicals work their way around the body causing cell and DNA damage.

Curcumin only makes up about 3% of turmeric and isn’t very bioavailable. The best way to get more of this powerful antioxidant is to supplement it.

Curcumin in turmeric is a strong anti-inflammatory agent. Inflammation is the body’s response to something irritating.

Acute inflammation is good, like when you get a cut or a deep scrape and the area is warm to touch and red.

This type of inflammation reduces the likelihood of infection and helps the area to heal.

This review of turmeric shows the studies were done that have proven a link between turmeric and its anti-inflammatory effects on arthritis.

4. Turmeric is a strong antioxidant

An antioxidant is simply a substance that prevents or slows down cell damage caused by free radicals.

There are different things that cause free radicals in the body but the most common are: exposure to air pollutants or industrial chemicals and byproducts of normal processes in the body.

Recently a lot of attention has been given to free radicals because of their ability to alter lipids, proteins and DNA which can trigger disease.

The most common disease triggered by free radicals is cancer.

Turmeric is a strong antioxidant because it is a good source of flavonoids.

Flavanoids are the biggest group of phytonutrients that you find in fruits and vegetables. They have a lot of health benefits like anti-viral and anti-inflammatory.

5. Turmeric may boost your brain health

Curcumin may stop the development of Alzheimer’s disease. The global rate of dementia has doubled compared to what it was in 1990 and neurodegenerative diseases are popping up in younger people.

Since curcumin is anti-inflammatory and a strong antioxidant, the science community concludes that it can play a vital role in protecting the brain from cell damage and inflammation.

In a double blind placebo controlled study, researchers from the University of California studied 40 adults aged between 51 and 84. Half the group took a Curcumin supplement daily for 18 months while the other half took a placebo (a pill without any effects).

As you can imagine, the group that took the curcumin supplement had decreased accumulations of the proteins responsible for Alzheimer’s disease as well as better memory and attention.

Cholesterol is a word that tends to scare people away. It is one of the main reasons people have become captivated with low-fat foods, low-fat diets and anything else low fat.

Somehow, through specific end-goal marketing techniques, saturated fats became the cause of heart disease and a reason to stay away from any and all fats.

But that isn’t the whole truth.

Thankfully, we now know that not all fats are bad and saturated fats are not the only cause of heart disease.

The studies done on turmeric and cholesterol have been done on animals so the jury is still out on its effects on the cholesterol of humans but what’s been found in animal studies looks promising.

Diabetes rates have soared over the last decade. This is not surprising at all given the incredible amounts of sugar people eat today.

This isn’t to say that sugar causes diabetes but the rates of diabetes have grown as people have consumed more sugar.

A 2013 study showed that turmeric may lower the levels of blood glucose in the body. Researchers concluded that curcumin may have a role to play in diabetes prevention.

What about curcumin supplements?

Since this herb is anti-inflammatory it has worked wonders for people suffering from autoimmune diseases.

Since curcumin is not readily bioavailable in the natural form of turmeric, supplementation can help you get more of this vital compound that has the health benefits you need to thrive.

There’s no doubt that turmeric is a powerful and natural superfood with a lot of well-documented evidence on its benefits on human health.

It has been used for thousands of years medicinally and in cooking and generations of people who have lived before us knew of this herb’s powerful health benefits.

Turmeric is an easy herb to use in cooking, make into teas, or added to smoothies.

For an extra boost, you can also add a supplement to your diet.

How about you? How do you get turmeric into your diet?